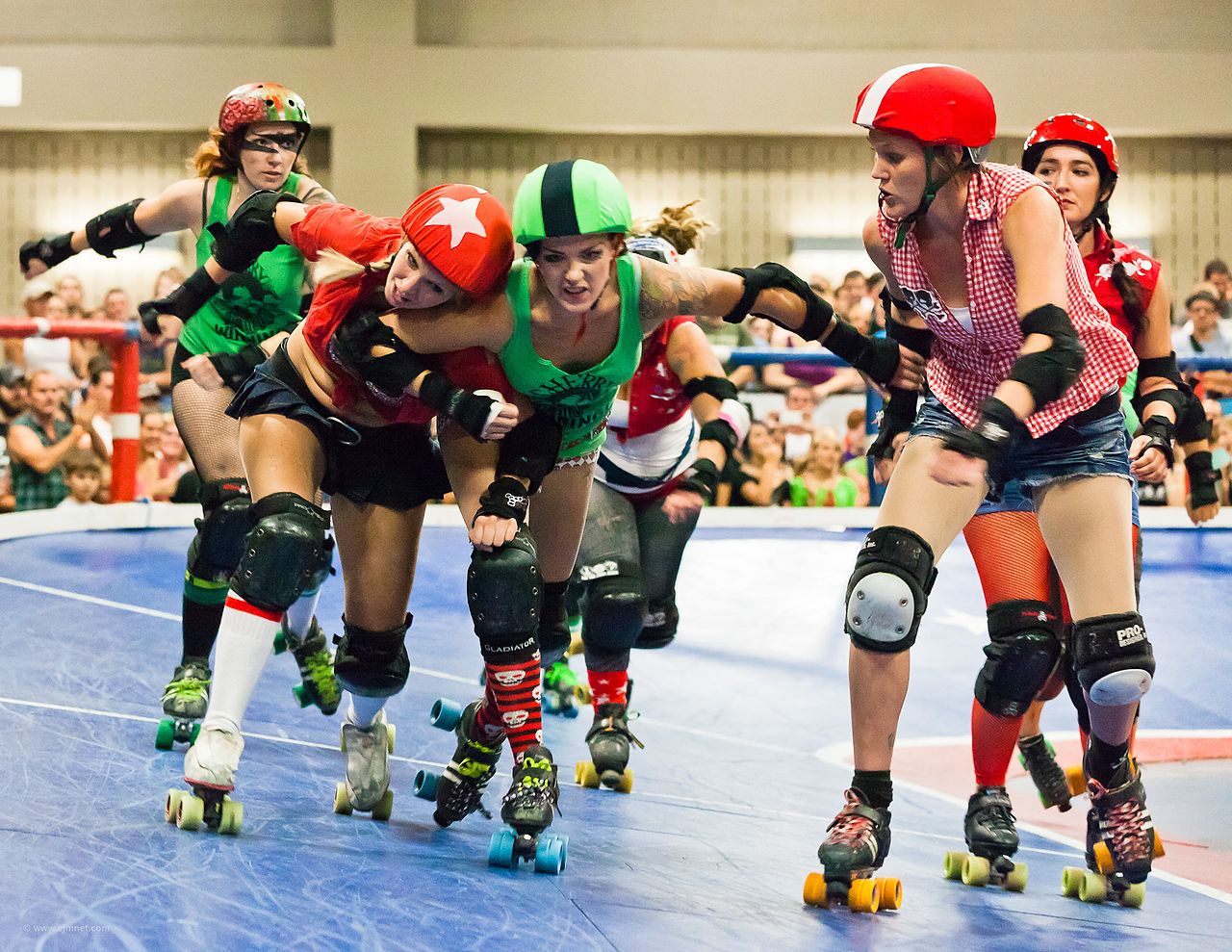 Today, when people think about extreme sports involving a helmet and wheels, most conjure up images of X Games skate boarders and BMX bike riders, but these sports don’t have a monopoly on excitement.

No, in an amazing comeback from athletic obscurity, roller derby has burst out of the 1970s and into the spotlight, with a punk “girls to the front” ethos and an unprecedented physical intensity. But how did we get here?

Originally a peculiar endurance sport dating back to the 1930s, roller derby made the jump in the 60s and 70s from long-distance racing to scored, track-based matches with techniques, signature moves, and positions. And then it disappeared. But since the early 2000s, leagues have been popping up all over the country.

The main organizing body of roller derby is the Women’s Flat Track Derby Association (WFTDA), founded as the United Leagues Coalition in 2004 with 20 flat track leagues. Today there are hundreds of leagues in the WFTDA, including international teams, and the organization is responsible for establishing rules and principles, providing insurance and liability coverage, and maintaining competition rankings. And things get very competitive.

To be fair, both men and women participate in roller derby, but even when men play, women are the face of the sport. Even in the 1970s, women helped make the sport a spectacle, very different from other women’s athletic opportunities, like the buttoned-down world of tennis or even softball. Watch early derby bouts and you’ll see men taking off their helmets to ram each other, while women embraced the style side, forming a whip to launch Skinny Minnie Miller through the pack to score points. A member of the LA T-birds and later a Canadian All-Star, Skinny Minnie was a school teacher in her day-to-day life, much like the women who play today.

Roller derby players may not actually be very athletic or have a history of participating in sports in the past, but if you can learn to skate, you can learn to play derby. As Tammy Waters of the Garden State Roller Girls notes, these women “kind of find their own inner-athlete. They discover that side of themselves they never knew they had — the will to hit and be hit.” How much you need to know to get started, then, depends on your local league, the majority of which hold fresh meat nights for potential new players.

You can borrow most of what you need to start playing roller derby, including skates, but you’ll need your own mouth guard and helmet for safety – you can be seriously injured playing roller derby, whether in a crash or by taking a direct hit from another player. If you actually join a team, then you can typically purchase all the added padding and skates in a starter kit.

The Fun And The Fans

Of course, roller derby wouldn’t be successful if it didn’t also have a fan base, but people come out en masse for derby bouts, armed with signs for their favorite players, shouting in support. The shouting is especially entertaining because derby players choose names that reflect their personalities, interests, and play on vulgar or even crass phrases. Whether it’s the slightly crude “Alpha Q. Up” – say it out loud if you don’t get it, the nerdy “Hell Vetica Black,” or the self-reflective “Nattie Long Legs” for a very tall player named Natalie, pun-filled names are part of the fun.

While the names might be PG-13, roller derby is popular with fans of all ages, in part, because it’s an affordable, engaging sport to watch. Parents come with their small children who love to watch the skaters race around and observe fans in silly outfits like tutus and glitter. It’s a real community gathering, and younger fans have even birthed junior derby leagues.

There’s a clear line between the rise of punk in the 1990s and women pushing for a sport – specifically a contact sport – where they are the top competitors. But for players in 2018, the most important thing is the camaraderie, the stress release, and the chance to be someone else.

When derby girls step on to the track, everything else falls away.