Do you love sports more than friends, family, and significant others? It’s okay if the answer is yes. If you’re like most devout sports fans, you don’t only want to watch regular games. You want to enjoy legendary events that will make you the envy of your friends. Here’s a list of seven events that should make the bucket list for the true sports fan. 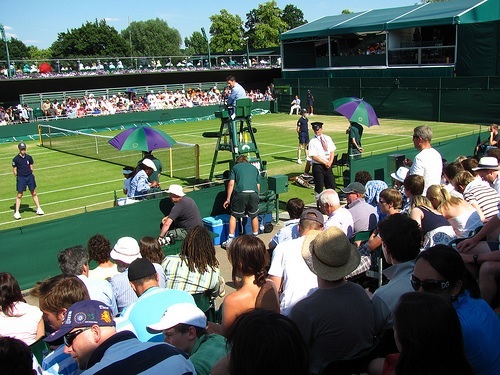 Come for the strawberries and cream and stay for the greatest tennis tournament in the world. A trip to Wimbledon means that you get to rub elbows not only with the glitterati but possibly even royalty. The Duchess of Kent even hands out the trophies each year. While there are four grand slams in tennis, everyone who follows the sport understands that Wimbledon is the one that matters. Plus, you’ll never look at tennis the same way again after you’ve watched it played on grass.

There are numerous great options for college football. As a competition, however, the annual Army-Navy game transcends sports. It’s a reflection of our military culture as well as a celebration of how well-trained and dutiful these student athletes are. While Navy has dominated the game in recent years, you can throw out the team records every year when they play. This is the ultimate battle for pride.

A billion people can’t be wrong each year. While other sporting competitions are popular across the globe, nothing rivals the Super Bowl in terms of international interest and pageantry. You’ll not only watch the NFL game of the year, but you’ll also get to enjoy a halftime concert featuring some of the most famous musical artists in the world. If you can only cross off one item from your sports bucket list, make sure it’s this one.

No one game in major league baseball is more important than all the others. Even the World Series is difficult to pinpoint as a single moment, because the final victory could occur anywhere between games four and seven, depending upon how competitive the teams are. Similarly, the All-Star Game itself is a silly event that’s so pointless that it once ended in a tie.

The Home Run Derby is different. This event reduces the sport to basic terms. The most powerful sluggers in the game take the strongest swings they can. Their results are binary. Anything less than a home run grades out as failure. A blow that flies beyond the outfield fences adds to the hitter’s total. It’s the most macho scoring system in the sport, and unlike daily team vs team matchups it offers a lot of betting options that you will not find any other time of the year.

Cynics may describe automobile racing as grown men driving in a circle for several hours, but who cares? It’s a blast to watch, and the pinnacle is unquestionably the race that takes place in the aptly named city of Speedway, Indiana. The uniquely built vehicles are even described as IndyCar racers. While the entire event is extremely loud and you WILL need earplugs, you’ll never forget the joy of watching the Indy 500 winner take the checkered flag.

Everyone who isn’t American considers soccer the greatest sport on the planet. No matter where you stand on the issue, the global popularity of it is hard to ignore. In fact, the viewership for the 2014 final of Germany versus Argentina achieved global television ratings akin to the Super Bowl. If you want to meet and talk smack with people from other countries about a sport you don’t understand and you don’t mind the sound of vuvuzelas, head to the World Cup.

Basketball at the Summer Olympics

Yes, the Americans will dominate the competition, whether you go to men’s or women’s basketball games. The results don’t matter, though. You’re here to watch the latest iteration of the Dream Team remind other upstarts across the world that no matter what happens in other sports, basketball remains the exclusive domain of the United States.

Realistically, you probably won’t make it to all of these places. Plus, your ultimate bucket list may have a few changes such as hockey or boxing. Still, if you go to more than one of these unforgettable events, you’ll be the envy of everyone you know.