American Pharoah is the first horse racing Triple Crown Winner since 1978. This accomplishment is one of the most lauded accomplishments in sports and now all eyes look toward the 2015 Breeder’s Cup to see if this wunderkind can continue his racing dominance. According to officials at the Keeneland Race Course in Lexington, KY, the October 30-31 race is sold out in anticipation of what may be the most historic race of all-time.

No Triple Crown winner has appeared at this prestigious event, as the Breeder’s Cup debuted in 1984, six years after the last horse Affirmed took the title. Although there is no track record (pardon the pun) to compare with regarding the past performance of Triple Crown horses racing at the Breeder’s Cup, the odds are in favor of American Pharoah making additional history and running away with the 31st version of the Breeder’s Cup. 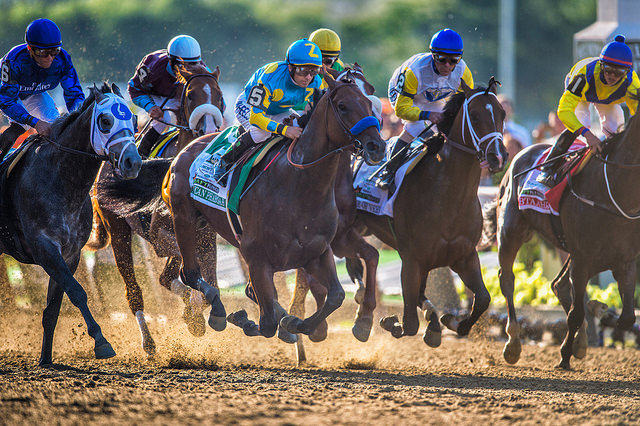 A Look at the Potential Field

The probables listed for the upcoming 2015 Breeder’s Cup included two horses that had a chance to establish their legacy by defeating American Pharoah in California Chrome and Dortmund. Both were alated as probables for the upcoming Cup race, creating a chance for Dortmund to avenge his 2015 Preakness and Kentucky Derby losses. California Chrome, the last horse to win two of the three Triple Crown races in 2014, was expected to enter the race as an older, experienced four-year old who might have created an interesting challenge to American Pharoah’s dominance. However, in a recent announcement from Nicholasville, Ky.-based Taylor Made, the owners of California Chrome stated that the thoroughbred will be rested through the end of 2015 due to bruised cannon bones.

In light of this recent development, Liam’s Map, a 4-year-old colt trained by Todd Fletcher, is considered to be the other primary contender to challenge American Pharoah’s quest.  Buzz built around this horse after a runner-up finish at the Whitney Handicap at Saratoga in early August. Dortmund and Liam’s Map’s presence in the Breeder’s Cup only heightens the excitement surrounding this event and the associated hype for matchups that may have historical significance in the sport of horse racing.

Can American Pharoah Be Beaten?

It may appear that American Pharoah, the Michael Jordan of horseracing, is unbeatable. His owners plan to race him in the upcoming Travers Stakes on August 29, 2015. If there is a test for American Pharaoh’s vulnerability it may be in Saratoga, a location that 40-something years ago unheralded Onion beat 1973 Triple Crown winner Secretariat. This victory established a precedence for Triple Crown winners eventually conceding to the field, although when 1978 TC winner Affirmed raced after the Belmont Stakes, he won his first race held in Saratoga (Jim Dandy Stakes), was disqualified in his second race at the Travers Stakes (also in Saratoga) against rival Alydar and was beat by another TC winner, Seattle Slew in the 1978 Marlboro Cup Invitational.

It is interesting to note that the possibility of American Pharoah being defeated may be slim but not necessarily impossible. Of the 11 previous TC winners that came before American Pharoah, 10 competed and seven won their first race after winning the Triple Crown. American Pharoah joined the list of winners with his win at the Haskell Invitational on August 2, 2015. Surviving Saratoga on the 29th of August will put American Pharoah in the envious position of all out favorite, unless one of the older horses slated for the October Breeder’s Cup can show that experience trumps youth and popularity.