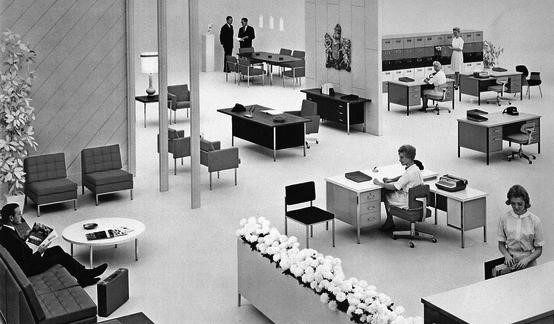 The word ‘office’ throws up many images and connotations. You might think of a classic eighties style cubicle, with personal phone and computer. Or, you may associate the term with more modern ideas, such as the creative environments at companies like Google. Both are valid because they represent different stages in the evolution of the corporate office.

It can be difficult to get a good perspective on just how much workspaces have changed. This is especially true if you’ve always operated out of a traditional office. When you’re in the thick of it, the focus is on what you do and don’t have, rather than what you could have. For instance, check out some alternatives to costly long-term leases at www.servcorp.com.sg/.

This guide to the evolution of the modern office will help you decide if you should switch to a more flexible workspace.

Swinging Through the Sixties

In the late sixties and early seventies, before the introduction of computers, most offices were based on an open plan design. Imagine the way fifties style workplaces are depicted in films, with the rows of desks all lined up in one room. They were noisy, hectic, and full of energy.

It was common for businesses to use movable sound screens so that employees could have a little privacy when talking with clients in person or on the phone. For the most part, though, everything happened in front of everybody else, aside from meetings with the manager.

Boxing It All Off in the Eighties

With the arrival of the first computers came the introduction of boxed off cubicles. Suddenly, everybody had their own space, but it was cramped and impersonal. In most countries, including Singapore, this is still a popular design. Although, it doesn’t do much for productivity.

Far from encouraging hard work, isolated cubicles actually cause more distractions. Employees feel cut off from the motivation and energy of their colleagues and they’re prone to procrastination. For this reason, offices have continued to change and evolve.

Going Virtual In the Nineties

While virtual offices can seem like a very new invention, they first appeared during the nineties. For a brief period, they were rather popular, but many business owners refused to believe that remote routines could run a business. So, they declined in prominence for a time.

They would return in style after numerous studies confirmed that flexible schedules are more productive than rigid, onsite routines. Virtual offices are now a major asset for entrepreneurs because they allow businesses to be run from literally anywhere in the world.

The Noughties Is for Coworking

The rise of the virtual office has inevitably led to the introduction of more flexible workspaces. It has paved the way for everything from coworking to hot desking. Coworking, in particular, is very useful for small business owners and solopreneurs.

It involves sharing a centralised office space, complete with all necessary amenities. The workspace is accessed kind of like a gym, on a ‘pay as you use’ basis. The big benefit is that business owners can enjoy all the advantages of a premium office, without the costly lease.

Making the Right Choice for Your Business

It’s worth considering all of the options if you’re planning to relocate your business. There are a lot of different offices in Singapore, so there’s no need to settle for anything less than the best. If you don’t want to commit to a five-year lease, you don’t have to.

If you’d rather not work from an uninspiring cubicle, there’s no need to. With so much choice on offer, don’t forget that you’re in charge. The coworking spaces in central Singapore are some of the best in the world. Check them out if you’re curious about this new breed of corporate workspace.