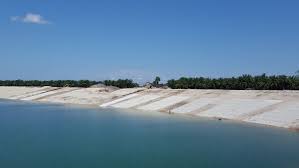 Beach erosion is one of the greatest threats to wildlife, properties and infrastructure along our coastlines. Thanks to a combination of storms, flooding, strong wave action, rising sea levels and human activity our precious beaches are wearing away faster than ever before. So, what exactly are the effects of these weathering forces and how can we prevent them from damaging our coastlines even more? Another question to be answered is what is beach erosion control? And how successful can it be at tackling this threat to some of our most beautiful landscapes?

Beaches across the globe rely on a constant supply of sand being removed and added to them by the tides and weather to maintain their size and the quality of the landscape. Put simply, beaches begin to erode when the sand being taken away isn’t being completely replaced. This can happen for a number of reasons with storms being the primary factor in many countries. In places where violent storms and winds are less common, beach erosion can also be caused by shrinking shorelines and rising tides. In other areas our beautiful beaches are also being damaged thanks to human interference. Building around coastal areas can limit a beach’s capacity to replenish its sand source, causing it to shrink. Some common human causes of beach erosion include constructing jetties, ports, seawalls and mining in rivers which all decrease the natural flow of the tides and sand to and from the shore. Ferry wakes have also been proven to have increased coastal erosion in some areas.

What is the extent of the damage?

Beach erosion is happening at varying rates across the globe. In the United Kingdom alone recent rates were described as shocking with around 3000km of coastline under threat. Some of the areas deemed at severe risk include beaches in Formby, Dorset, Sussex and Norfolk. The worst damage to UK shorelines in recent years occurred in 2013 and 2014, during which a series of storms are estimated to have caused an amount of erosion damage predicted to take place over a 5 to 10 year period. During that time, around 10 metres of Formby beach disappeared overnight. According to the Environment Agency, the entire UK coastline could retreat by a terrifying 67-175 metres over the next 100 years. Globally, the picture isn’t much brighter with government agencies reporting coasts from China to Florida all having higher than acceptable beach erosion rates.

How can we prevent it?

There are a number of ways beach erosion can be prevented and agencies have already been set up all around the country to help do so. There are also a number of engineering methods that can be used to help protect the landscape. These solutions both repair and reinstate the coast. Some methods include building breakwaters or groynes to protect at risk areas. Others include reconstructing damaged dunes and helping rehabilitate reefs in order to protect and reinforce the delicate systems. In some areas beach nourishment replaces displaced sand with that from other sources. This is commonly used on coastal resorts popular with tourists. Although it has proved successful in the past it isn’t a long-term preventative measure.