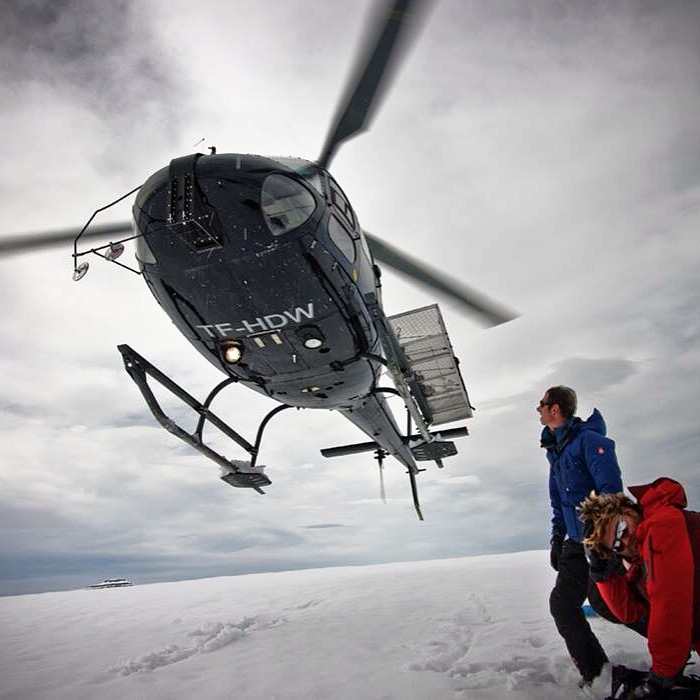 Mainstream publications sometimes label Iceland heli skiing as “adventure travel”, which could bring to mind arduous logistics and harrowing physical challenges that may not end well. The great news about this adventure is that it’s mainly a state of mind and remarkably easy to access. Iceland is certainly off the beaten path, but it’s still possible to depart from a major airport and be skiing the same afternoon.

Adventure in a New Way of Life

The heli skiing in Iceland is different from the classic Canadian experience that started the trend. Iceland mountains were formed by volcanic activity, which make them a unique combination of sharp and jagged, but smooth and rolling. The violent explosions of volcanoes create deep craters and sharp ridgelines, while the long flows of hot lava result in slopes that are more gradual. When you have a flashy helicopter to access it with, this means you can pick whatever terrain suits your mood or skill level.

Skiing from mountaintop to ocean shore is a rarity in most locales, but a fairly common occurrence for Iceland heli skiers. It’s easy to know where the end of the run is. Just look for the broad expanse of blue water. It feels weird at first to start your flight by looking for whales and then finish it by scouting your line, but after a while you realize it’s a pretty cool combination.

Iceland has plenty of powder, averaging almost 400 inches a year, and it falls across a later winter season that extends into April, May, and even June. The temps aren’t nearly as bitter cold as you might expect, and the powder in February and March can be top notch.

However, the specialty of Iceland heli skiing is long runs of perfect spring corn. In the second half of the season daylight stretches way into the evening hours and it’s easy to time your heli runs with the freeze/thaw cycle of the snow pack. Choose southeast exposures earlier in the day as the sun warms them first, and then travel towards the north and west aspects as the day continues. This pattern insures that the surface is never too mushy and keeps you skiing into the long evening hours.

The night sky is another amazing feature of the Iceland experience. When you’re not skiing under the extended daylight, you might be able to stay awake long enough to observe the fantastic Aurora Borealis, or Northern Lights. The flickering phenomena are even more impressive in person than the pictures you’ve seen.

Iceland is closer to Europe than North America, but is has a culture that is all its own. Vikings from Norway settled it about 1100 years ago, and evidence of its heritage can still be seen throughout the country. For example, the heli ski lodge is a converted sheep farm that has been owned by the same family for hundreds of years. They feature sumptuous dinners based on a traditional menu of lamb, fish, and local wild game.

The sleeping accommodations are in traditional style cabins, outfitted with all the modern comforts. The beautiful styling makes you feel as if you’re in the old country, without any of the rigors of ancient farm life. The former barn has been completely remodeled, and is now the most popular hangout spot on the premises. Whether you want to relax by the warm wood stove or loosen up in the yoga studio, this is the place to be when you’re not skiing.

The ongoing geothermal activity in Iceland means there are many natural hot springs and soaking pools.

The Klængshóll Lodge where we stay has a custom Spa House with a large sauna and outdoor hot tub that has views of the broad valley, or more of the Northern Lights.

Make it Your Next Escape

All of these things combine to make an Iceland heli ski trip unique and adventurous, but not difficult in any way. Fly into the barren wilderness, and then shred its Arctic snow to ribbons. Get rejuvenated each night at the traditional farm house while soaking up the local culture in a geyser fed pool. This is the kind of adventure that’s hard to get enough of.