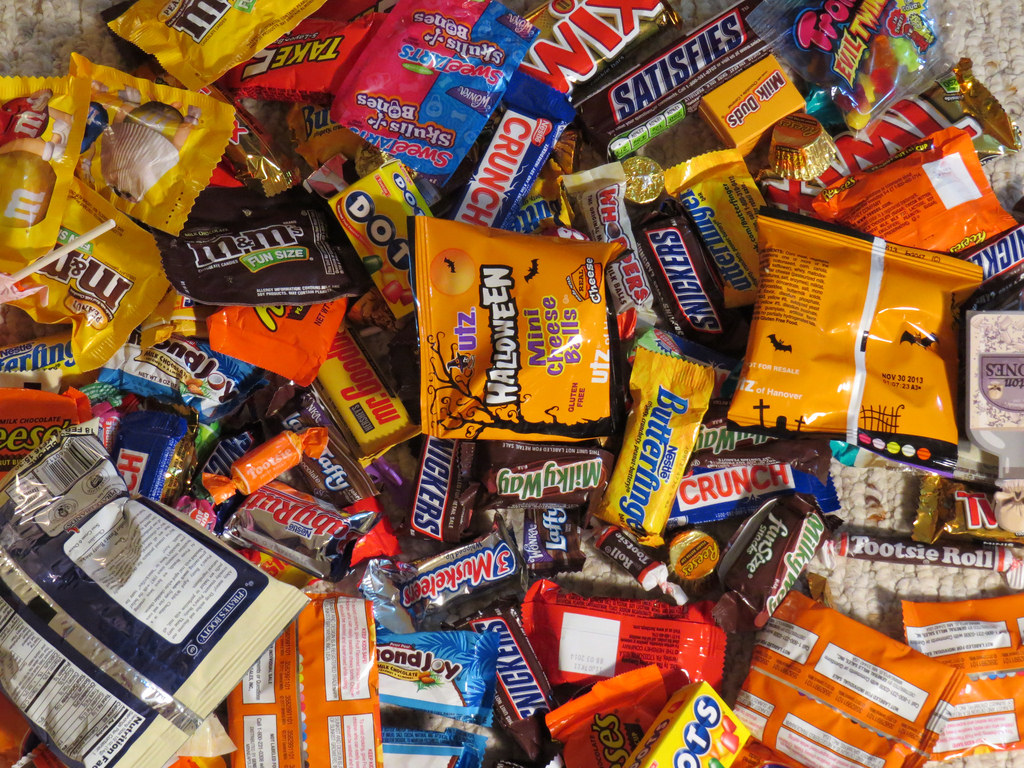 On the surface, Halloween can be a lot of fun. It’s a blast to dress up, attend parties, watch Hocus Pocus, and go door to door to visit family and friends.

But then there’s the mixed delight of Halloween, which is the candy. Not only can people slip dangerous items into your children’s treat bags, but kids often eat themselves sick. Then they experience a sugar high and develop lots of cavities to show for it.

On a daily basis, average sugar consumption for Americans is astronomical. People consume much more sugar than they need, and the worst of it happens over this holiday dedicated to sweets.

According to an infographic published on Visually, more than 158 million Americans participate in Halloween festivities. During this holiday, the average American will eat more than 3.4 pounds of candy.

Kids would have to walk 180 miles to burn off what the average child eats in a single night in October. As a concerned parent, you obviously don’t want your kids to end up overeating on Halloween. Luckily, there are some tried-and-true ploys some parents use to limit their kids’ candy consumption every year.

What’s the one thing kids love more than candy? Money. Many dentists, like this popular office in Oregon, allow kids to exchange candy for a cash prize.

They’ll usually pay a certain dollar amount per pound. Some dentists also offer grand prizes for the kid who brings in the most candy. If you can’t find a candy buy-back program near you, think about paying the kids yourself for their candy.

You don’t have to offer much, and it’s better than watching them eat too much sugar for days on end.

As soon as the kids get home, and you’ve inspected their candy, let them select a few pieces to eat that night.

Hide the rest of their candy so they can’t gorge themselves right away. They may not be pleased about this, but the promise of (a little) more candy the next day should be enough to hold them off.

Have you ever heard the expression “monkey see, monkey do”? That phrase applies in full force here.

Kids won’t want to stop munching on Halloween candy if they see you sneaking a candy bar. Keep your sweet snacking to a minimum, and try to model healthier habits this Halloween.

Use resealable baggies to spread out the candy into more manageable portions. Put just a few pieces into each bag and promise your kids they can have a bag a day. Depending on the amount of candy your kids collect, you should be able to make this system extend for a week or more.

The Switch Witch is a parenting hack that has gained popularity in the last few Halloween holidays. Rather than hiding, buying, or rationing out candy, parents will visit their kids’ Halloween bags with the Switch Witch.

It’s the same concept as the tooth fairy, but instead of swapping teeth for a prize, you’re swapping out candy for money, books, or other non-edible prizes. It’s a fun process for the kids that helps cushion the blow of seeing their candy get taken away at the end of the night.

The old adage “out of sight, out of mind” doesn’t always work with kids. They can sometimes become so focused on a single item that they can’t think of anything else.

If you hide their candy, they might drive you crazy asking for it until you give in. The solution is to shift their focus to something that’s a little more healthy.

In the days leading up to Halloween, come up with a few activities your kids can do on the days that will follow it. If you can keep their minds occupied on other things, they’re less likely to become fixated on their missing sweets.

Your pass-out candy shouldn’t consist of your family’s favorite treats. You and they will spend half the night munching away instead of passing it out to trick-or-treaters. It’s much better to choose candy you don’t care for to nip a bad habit in the bud.

Think of creative ways to spread out the candy rather than eating it all at once. For example, you could collect all the M&Ms and chocolate bars to make cookies for the neighbors. You could also use the candy for activities like Bingo or as a prize for doing chores. It gives kids something else to think about.